There is plenty of chatter about the R34 Skyline migrating to the Canadian market starting in 2014. But what will happen when it actually does become eligible? Will there be a sudden flood of these cars imported to Canada? Considering how difficult it is to finance a 15 year old car, how many of the prospective buyers have the dough ready to cough up on a ‘34? There have been rumors of 34’s imported in pieces and assembled, track only cars, show cars and half-cuts put together with a mig welder and some glue, Terreto stealing a studio car.. prices have ranged from ungrounded speculation to the absurd, to spot on but impossible to explain. I will try to explain the price of Skyline BNR34’s as they pertain to the car’s condition and history, which are the only determining factors in cars fetching values at auctions in Japan.

All of the chatter about this car begs the question of how much it will cost. The reality is, they will cost a lot. Like the Honda NSX which basically hasn’t depreciated since it became eligible for the Canadian market, the R34’s have held a strong value over the years. They have a significant cult following both in Japan and other JDM import markets. And like the NSX, cheap ones should scare you! These cars are fast and the wet dream of plenty of young guys around the world including Japan, where these prospective immigrants have NOT been patiently waiting this past 15 years. Fifteen years is plenty of time for a car to have been tracked, fiddled with, restored, smacked, taken out on a first date to impress your transvestite lover (do you even want to imagine what people do inside their cars for a decade and a half?).

So, yes, the least respectable BNR34’s are selling for around JPY2,000,000. But there is a reason some of them sell for 3 or 4 million and not 2, which is how wholesale markets are supposed to work.

Here is a pretty good example of a cheap Skyline which sold for around JPY2,000,000: 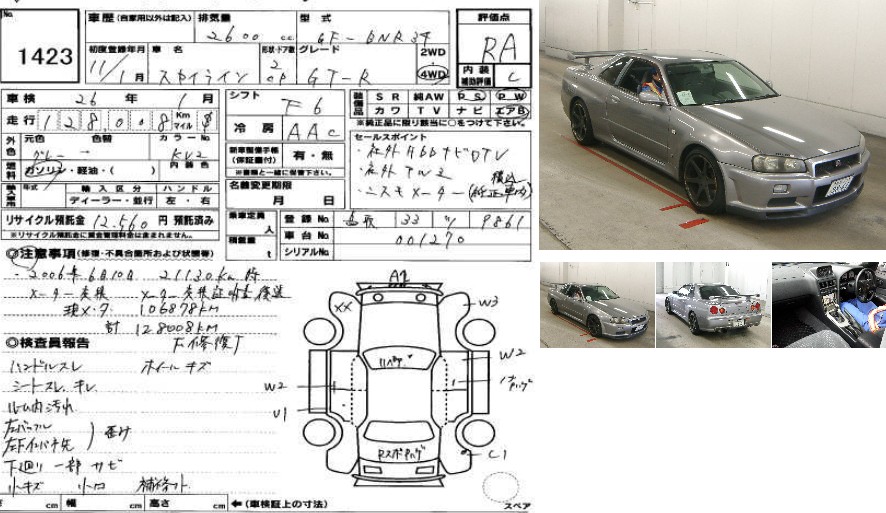 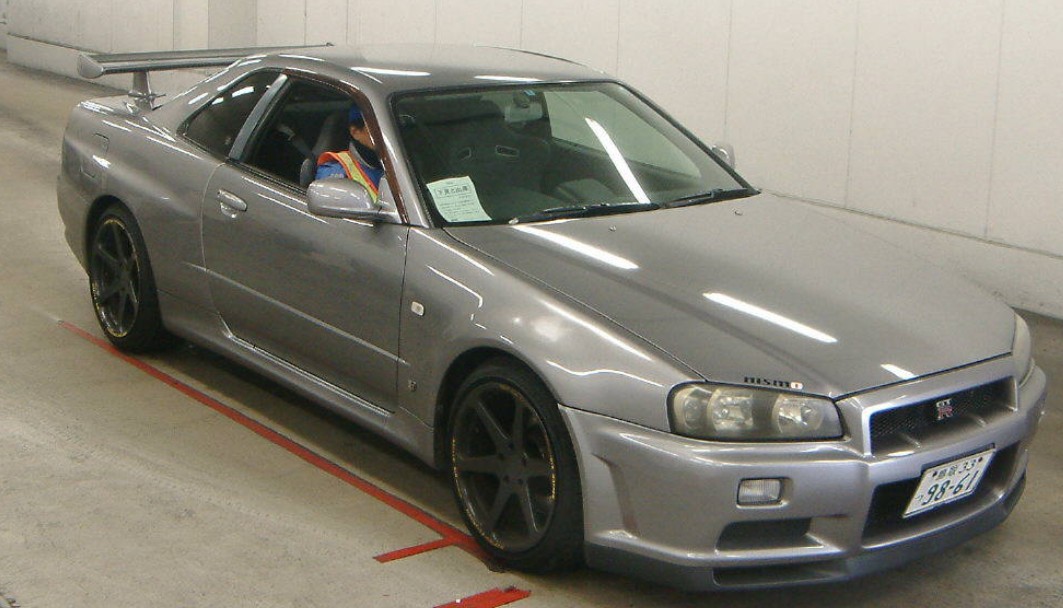 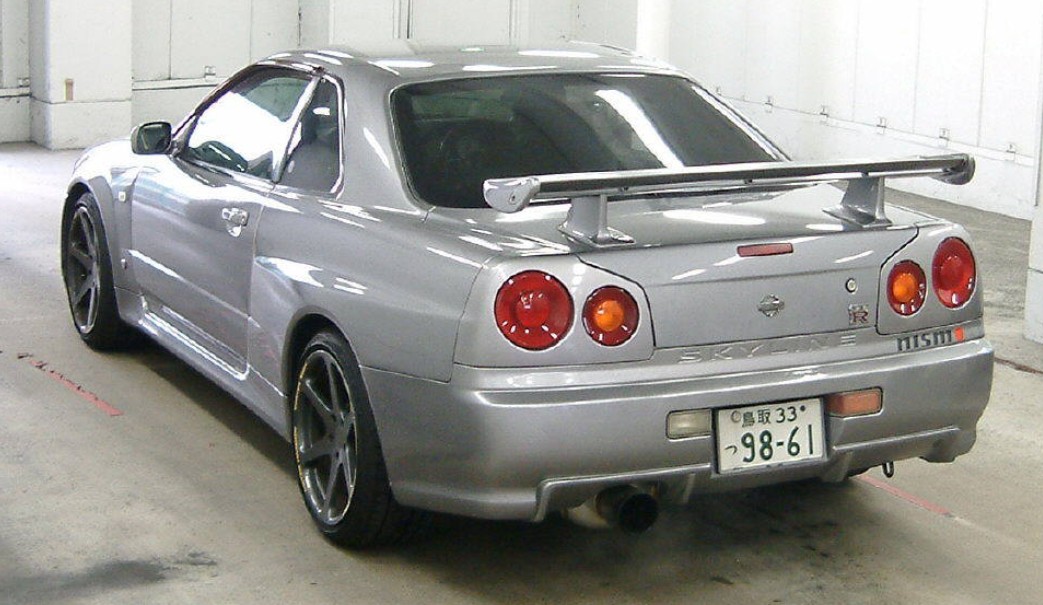 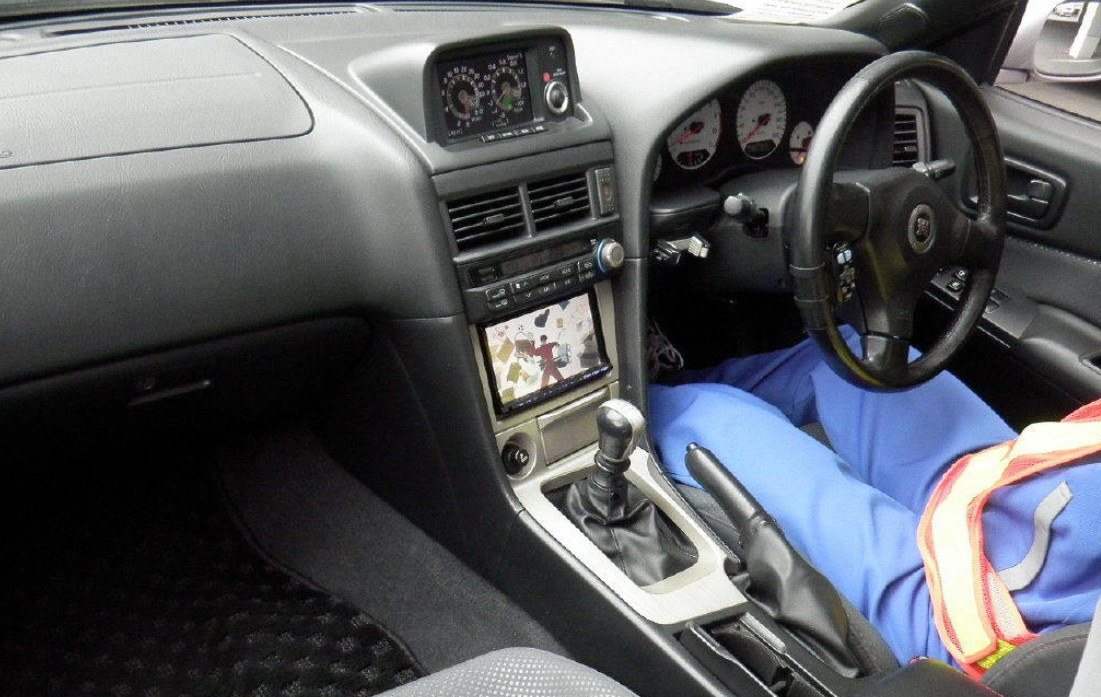 This car looks perfectly fine, and quite possible it would make somebody very happy. It is eligible in January of 2014 (one of the first ever to roll out of assembly). But it has had a bit of history, and some of that history is questionable.

We also have small paint waves and paint discolorations covering a lot of the body. The auction sheet describes this car as a front accident, but only the front left quarter panel has been replaced. We have big paint waves on the front right quarter, bends in the front left inner and baffle, and paint fade spots where the spray lines were badly re-applied. There is also some rust underneath, and corrosion on a wheel arch.

The reality is that a 15 year old car was perfect 15 years ago, and will no doubt have some issues now. But some auction inspector spent 10 minutes poking around this thing, threw it up on a lift and then jotted some notes down. What he saw in 10 minutes wasn’t great. And that is the cheaper end of the R34 spectrum.

The good news is that a budget with 5 or 7 grand more thrown at the car, will put you in running for something fairly decent! There are 34’s selling around the JPY2.5m-JPY2.8m mark that would make somebody happy. To be sure, they aren’t showroom cars, but their mileage is respectable, the upholstery doesn’t have dog or human staining, and the frame doesn’t show signs that it has been underwater or used to plug cracks in nuclear facilities: 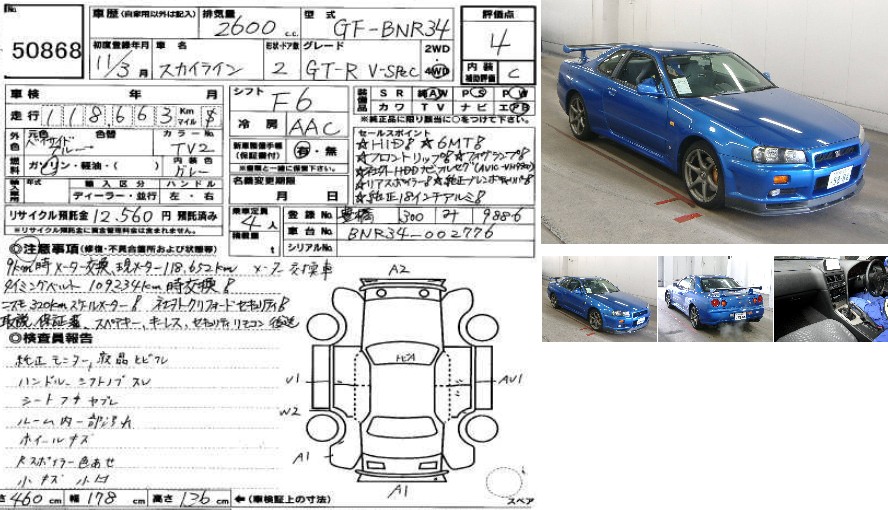 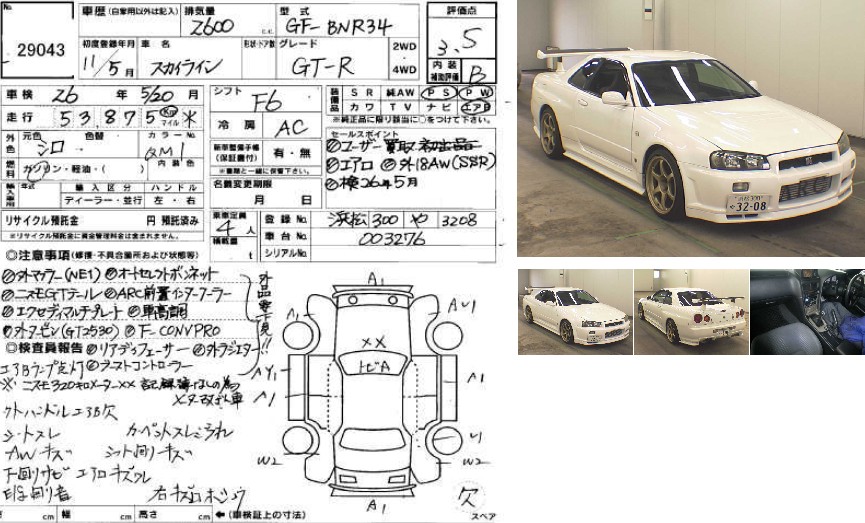 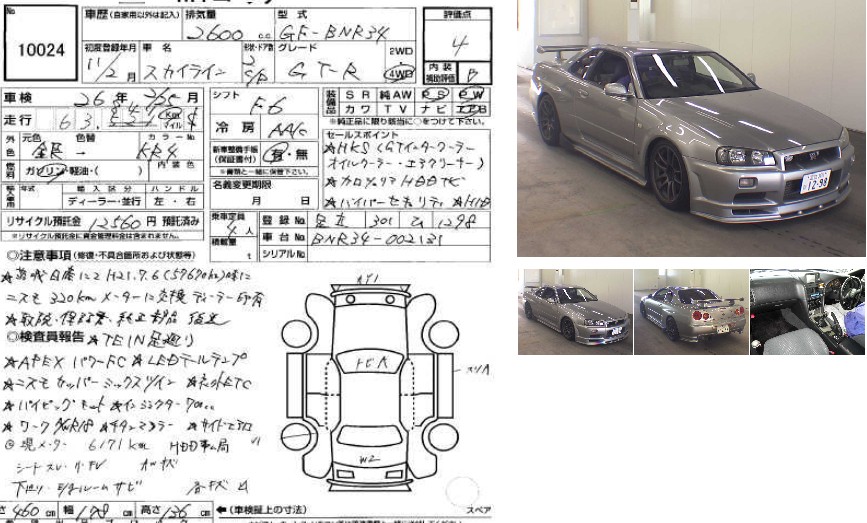 These three all sit in the JPY2.5m to JPY2.8m FOB range. What they share is light cosmetic wear (like leather on the steering wheel and shift knob wearing off, seat corners a bit crushed out etc), they also have odometer roll-backs or swaps for NISMO gauges. And they may have some mechanical goodies in them as well.

Auction employees liked the look of these three though, and graded them quite well despite minor imperfections.  These are the good deals. Similar condition cars sell for JPY3m easily.

The last category for ‘99 R34 price points would inspire conversations like this:

random guy: ‘how much did you pay for this?’

random guy: ‘I saw one on Kijiji last year for like $18 grand’

random guy: ‘So you paid more than that?’

owner: ‘I told you I’d rather not say’

random guy: ‘I bet you got ripped off!!’

A lot of JDM drivers are accosted and asked to justify ourselves by random people on the street or in traffic. It is something about one driver pulling up next to a car and finding himself so close to the other driver’s rolled down window that he would feel awkward not saying anything. So, small talk is exchanged, the uncouth and broke are always curious about money, and urban legend is suddenly remembered ‘These are impossible to insure in Ontario!!’

Some Skylines actually do sell for over JPY3.5m at auction in Japan. These are the special editions, low mileage, very well cared for garage queens. They are near perfect cars, that need to be sold to people who need near perfect cars, people who would be upset by paint that shows any traces of touch up. If your bile would rise looking at a crushed seat corner, teeth marks in steering wheel leather, or scrape marks on a diffuser than this is the price point you need to seriously consider: 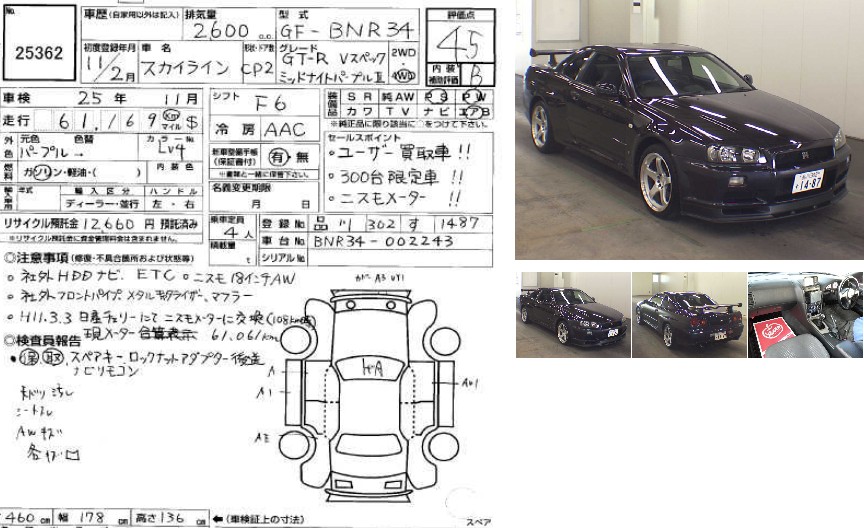 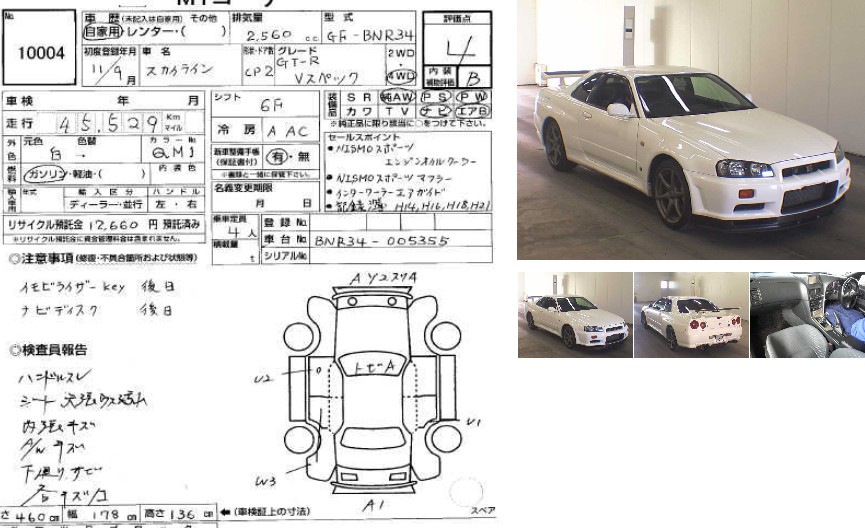 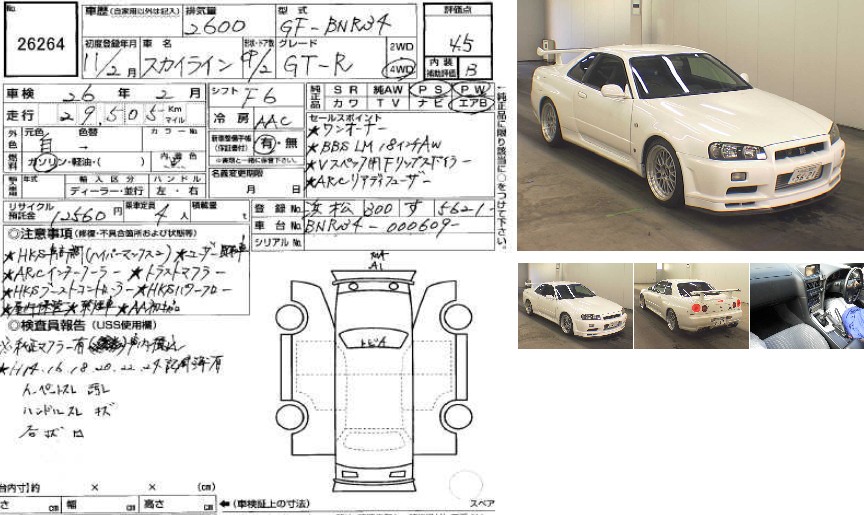 On these cars the flaws are minimal, edition might be special, and any modification is tasteful. But seriously, we are looking at a shift in price that doubles where we started looking. This discrepancy in price will lead to some tricky areas in our import market. With a $20,000 spread in price at auction in Japan there is a lot of opportunity for an importer to talk his car up. The cheap ones are flawed, but the expensive ones really should be near perfect.

So, at the end of the day, what are these cars going to cost if you import with Bonsai Rides? Contact me for a quote!